A Heart-Healthy Take on a Fall Flavour ClassicPrint 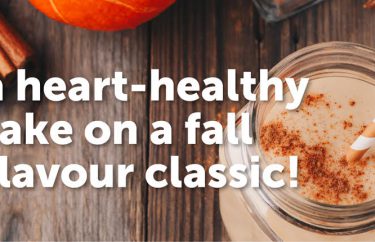 There is a long list of pumpkin spice inspired products available to consumers this time of year. There are pumpkin spiced beers, cereals and yes, even dog treats.

The pumpkin spice mix is essentially a blend of ground cinnamon, nutmeg, ginger and allspice, but it has been known to include other ingredients like clove, cardamom and mace as well. The blend is believed to have been first marketed in the U.S. as a quick and easy way to season pumpkin pies in the 50s.

Today this favourite fall-time flavour combo is especially popular in espresso-based beverages available at most major and independent coffee shops. The pumpkin spice latte – or simply the PSL – is often marketed as a frothy beverage that evokes aromas of freshly baked pies and which embodies other autumnal associations.

Surely, that which conjures memories of knitted woolen sweaters, a crackling fireplace, and the vivid colours of fallen leaves must be as good for our health as the thoughts they inspire.

A team of dietitians working in the Division of Cardiac Prevention and Rehabilitation at the University of Ottawa Heart Institute says not so fast.

Though Turner admits no links to cardiovascular diseases caused solely by pumpkin spice lattes exist, diets high in sugars found in common PSL recipes may lead to heart problems down the line.

“High intake of the free sugar typically found in juice, pop, and other sugar-sweetened beverages may be linked to cardiovascular disease and diabetes,” said Turner. “Sugar is often found added to foods to enhance flavour. Unfortunately, it’s difficult to tell exactly how much sugar has been added. Your best bet to reduce sugar is to cook more often at home and limit your intake of juice, pop and other sugar sweetened beverages.” Turner also notes high sugar intake is linked to dental caries.

The World Health Organization recommends on its website no more than 25-50 grams (the equivalent of 6-12 teaspoons) of sugar per day for the average person. To put that amount into context, a venti-sized offering of a pumpkin spice latte from Starbucks contains 40 grams of added sugar when served with 2% milk and whipped topping. That’s more than 10 teaspoons of added sugar in one sitting!

“Many sweetened lattes have high amounts of hidden sugar in them which exceed the daily recommended sugar intake in one drink. As an alternative try a regular latte which includes no added sugar. If you love a pumpkin spice latte, try enjoying a smaller size and less often.”

As an alternative to the sugar-loaded PSL Turner and her colleagues at the UOHI have modified a common PSL recipe for safe(r) consumption this fall:

For a D-I-Y Pumpkin Spice Latte with Less Sugar:

Turner and her colleagues at the UOHI have also developed a list of tips and tricks for healthier eating.

“Remember that it’s your overall pattern of eating which is important – not one single food or nutrient. Check out our Top 10 tips to Healthy Eating for more information.”

These tips and tricks will soon be turned into a short video series offering similar types of heart healthy information.