Without the headlines, they continue to save lives at the Heart Institute

From the Ottawa Sun 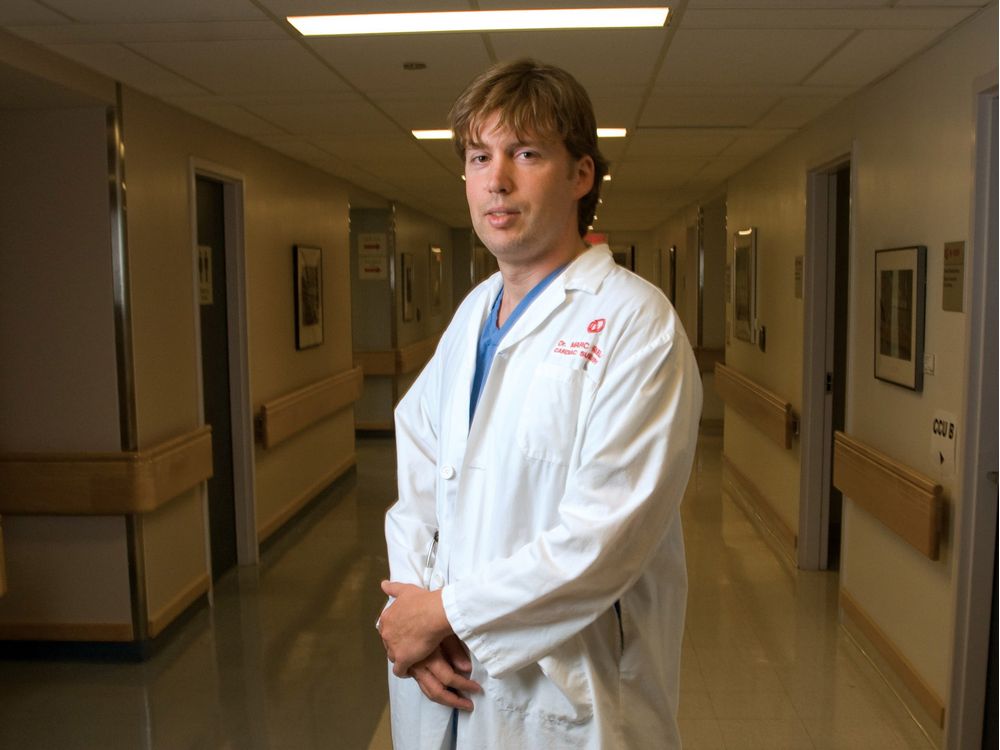 The term “heartbreaking loss” is used often in sports but the result on a scoreboard is nothing, of course, compared to the emotional pain experienced by every one of us at some point.

Truly heartbreaking is the loss of a friend or family member. A very loved one. Like Cliff Dunn, a great man who suffered a heart attack after hosting a small gathering for Christmas dinner at his condo in North Bay.

My uncle was 83 and had a history of health problems. His passing shouldn’t have been a surprise, but it was.

Somehow, I thought he’d be with us forever.

The term “hero” is used often in sports to describe athletes who save their teams from defeat, but the real superstars in our world protect and save lives. Heroes are the team at the University of Ottawa Heart Institute.

Canada’s largest cardiovascular health centre was founded in 1976 by Dr. Wilbert Keon. It is attached to the back of The Ottawa Hospital Civic campus in the west end of the nation’s capital. If you’ve not yet seen or been inside its walls, the sad truth is a visit might very well be in your future.

“The estimate is that every person in the large Ottawa region has about a 25 per cent chance of having a first degree relationship with the Heart Institute,” said Dr. Marc Ruel, the chief of surgery at UOHI. “Either for themselves or someone of their immediate family. We’re not even talking about cousins. I think everyone has a cousin that was worked on at the Heart Institute, so the first degree relationship is very common.

“It touches a lot of people.”

Ruel’s immediate team currently consists of  eight operating doctors, including Dr. Thierry Mesana, the CEO of the institute. There are also two senior surgeons who have hung up their scalpels but provide consultancy, as well a couple of basic scientists who work in the lab.

It’s a “fairly large” division of a dozen, not counting the important supporting staff of trainees, operating room assistants and administrators.

And they are all kept quite busy.

There are four operating rooms that run every day and a fifth available on Mondays. With “seven or eight operations” per day, that’s approximately 1700 a year — an increase of about 300 over the past five years.

“If you were to look at heart surgery centres in North America, you won’t find many that have gone up 15 to 20 per cent over the last few years,” Ruel said. “Usually centres tend to keep about the same number.”

Demand for the Heart Institute’s services is great as referrals pour in from coast to coast.

Ruel estimates that about 40 pervcent come for bypass surgery, 40 per cent for valve surgery and “then 20 per cent is a mix of other things, like aortic surgery, heart failure surgery and some adult congenital surgery.”

After graduating from medical school at the University of Ottawa in 1994, back when it was necessary to start out as a general surgeon, Ruel completed a stint in Quebec City, then returned to receive his specialist certification in cardiac surgery in 2000.

While he only wanted to operate, Ruel heeded the advice of Keon, who thought it best that he develop further at Harvard, where he was sent to focus solely on research. He returned in 2002 with a masters in public health and set up a lab that has been funded by national agencies for 15 years.

Ruel’s passion for surgery has never waned, however, and despite all of the responsibilities that come with his position, he also operates on a regular basis.

He thrives on the pressures of saving lives.

“Everyone doing their job well has pressures, I think,” he said. “It’s just different. I often compare heart surgery to flying a plane. When you think about it, you’re going to get into this metal tube, and you’re going to leave from Toronto and land in Tokyo, and you’re going to be in the air for 13 hours. There’s no refuelling, no nothing. It’s a self-contained system that flies at 40,000 feet. It’s a miracle, when you think of it. It’s amazing. And it’s so safe. There are so many step-wise progressive landmarks that have led to this becoming a safe thing.

“Heart surgery is a bit of the same. When you cut open someone’s heart, you take away a valve or you cut through it and you make it work again, or you stop someone’s circulation, you put them on ice for 30 minutes, then you repair the blood vessels going to the head, because there can not be any circulation during that time, and the person is essentially without any form of life whatsoever. You can imagine now how many things had to lead to this being performed safely.”

Like a quarterback calling audibles at the line of scrimmage, adjustments have to be made in the operating room, on occasion.

“Sometimes you have to divert from the original plan and do something else, a little bit like when you’re taking off from Ottawa and heading to Vancouver, but there’s thunderstorms and they’re not clearing, so you’ve got to land in Kelowna or Calgary or something,” Ruel said.  “Our quality process has obviously improved, always, constantly.”

And the results are generally phenomenal.

“Last year, of all patients who came for heart surgery, including emergencies and dire situations, we had an overall death rate of about 2.4 per cent, 2.5 per cent,” he said. “That’s extremely low. The best institutions in the U.S. have about 2.9, 2.8, in all comers. And if you look at elective bypass surgeries, most years we may not even have someone who doesn’t make it out of many hundreds of patients.”

And, just as in sports, Ruel says it’s the teamwork that makes it all possible.

“It is very gratifying. You don’t always have a favourable outcome, but I think each surgeon and team feels that sometimes they have someone that, if they had not gone above and beyond, the person would not have made it. I think we all have stories about that.

“It’s very important to have team engagement, a team that works together.”

The real heroes of our world.