Meet a few of the talented artists behind the ceiling tiles

Following the success of the Healing HeARTs project – where ceiling tiles were painted and have been installed above hospital beds in the Day Unit and Regional Referral Centre of the Heart Institute – we interviewed a few of the artists and asked them about their connection to the Heart Institute, what motivated them to paint a tile, and what this project has meant to them. Below are their stories. 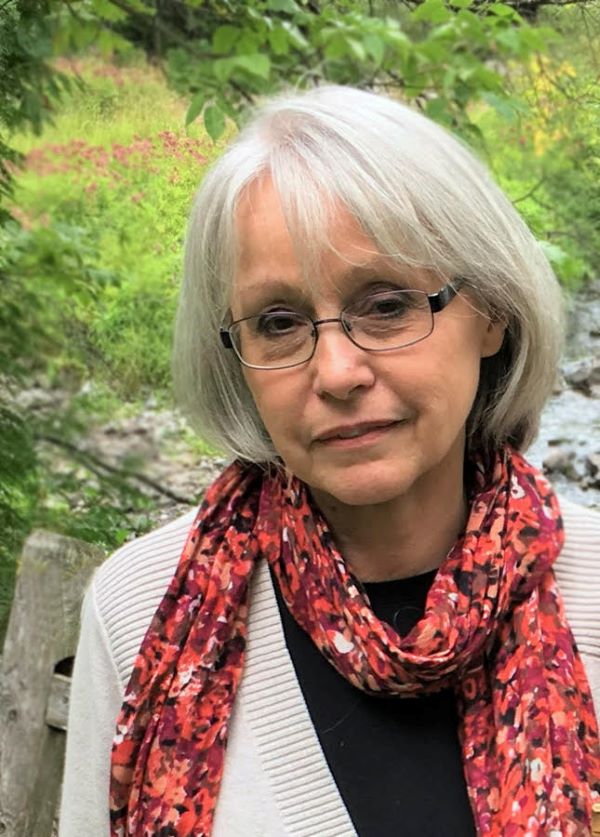 Bev has been painting since 2000, beginning with portraits of her pet parrots and of other pet owners’ birds. Eventually, as her subject matter evolved into painting wild birds, she realized she needed to learn how to paint landscapes to complete those compositions. This blossomed into her current love of painting landscapes.

Bev’s personal connections to the Heart Institute are many. In 2006, her husband made a trip to Emergency that resulted in 4 stents being put in. Her stepson had a massive heart attack at the young age of 46. More recently, her brother-in-law was in Emergency with congestive heart failure, and through a routine angiogram heart blockages were discovered that led to bypass surgery. Bev’s sister also worked at the Heart Institute for 27 years as a well-loved ward clerk.

Bev learned about the Healing HeARTs project call for artists through a Facebook post in an artists group, only one day before the deadline. She hurried to submit her application because she thought it was both a really neat idea and a way to give back to the Heart Institute that had done so much for her family. Putting herself in the shoes of someone going through a procedure, she imagined that people in these situations might be scared and need something to focus on besides what they’re going through.

When she was painting her scene of a bridge at the Arboretum, she was thinking: “will patients be able to put themselves in the scene and will it bring calm thoughts?” She also enjoyed painting on the bumpy surface of the tile itself; she felt that helped to give the painting an impressionistic look. She was very happy to have been able to participate in this project and would love to contribute again if more ceiling tiles are needed. 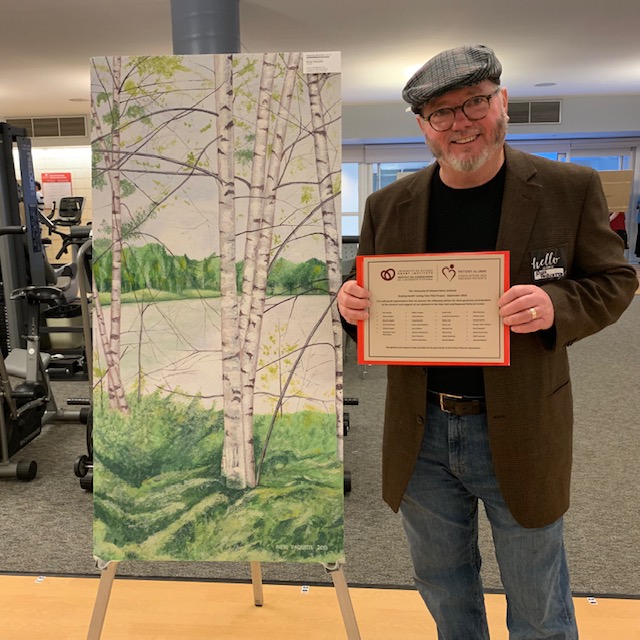 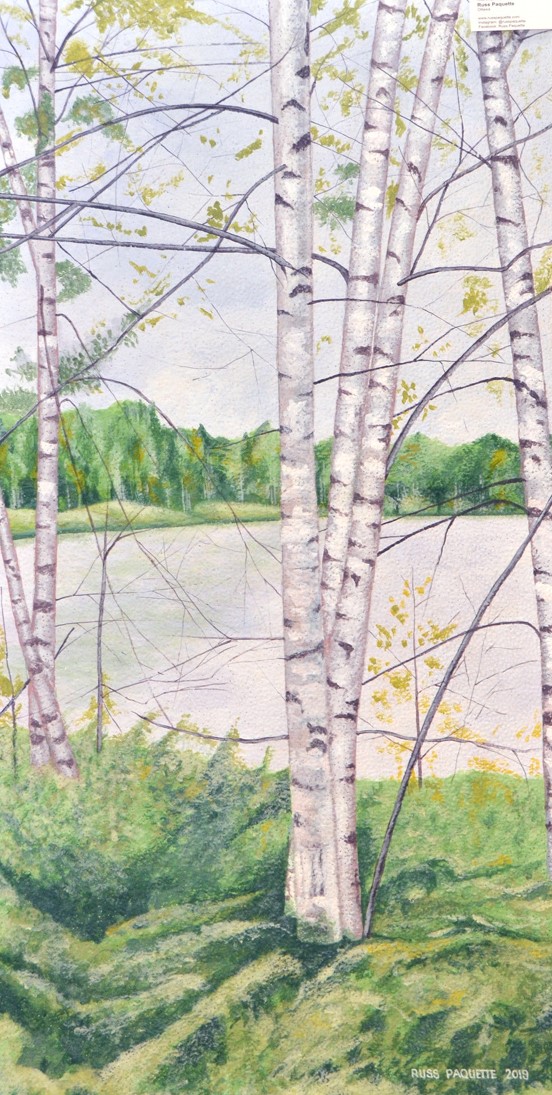 For the first part of Russ’s career, he studied and worked as a commercial artist, specializing in interior and exterior graphics (sign making). He enjoyed this work and the opportunity it provided to work on different surfaces such as stone, metal and wood. At the age of 38, he decided to study theology and joined the clergy to help struggling communities in the Ottawa area. At 55 years old, he returned to the arts, this time as a fine artist.

Russ’s father started showing signs of heart disease in his 40s; at 46 years old he had open heart surgery with a triple bypass. Several years after he retired, symptoms returned with angina. That said, thanks to the care Russ’ father received at the Heart Institute, the last 15 years of his life were his best according to Russ. His parents spent every summer during those years at their trailer on Big Clear Lake and he described their daily routine: fishing with friends, sitting and drinking coffee in the shade of a tree together all afternoon, having friends over for dinner and spending evenings playing guitars, drinking coffee and singing. His father did eventually need a second heart surgery, and although it was debatable whether he would survive it, he came through with flying colours. Russ is very grateful to the Heart Institute for giving his father all those healthy and happy years of retirement.

Having undergone several surgeries of his own, Russ remembers looking up at the ceiling and searching for something on which to focus his attention to get his mind off what he was experiencing. He hopes that the ceiling tiles will really help patients manage stress in these situations, allowing them to look beyond the physical walls of the hospital towards nature, or to imagine a future after this experience.

He chose to paint birch trees because of their sacred significance (he referenced the many cultures including indigenous Canadian culture who consider the birch to be a tree of healing). Russ sees art as sacred and felt that the whole experience of painting the ceiling tile had a sacred feel. He feels that if an artist feels this way while painting, then “something in the art will become greater than crushed pigment on textured canvas”; the painting takes on a spirituality that is timeless.

As a pastor, he was called upon to visit patients at the Heart Institute in very difficult circumstances. The Heart Institute, he says, was always so respectful of his role; he described it as a really beautiful experience. 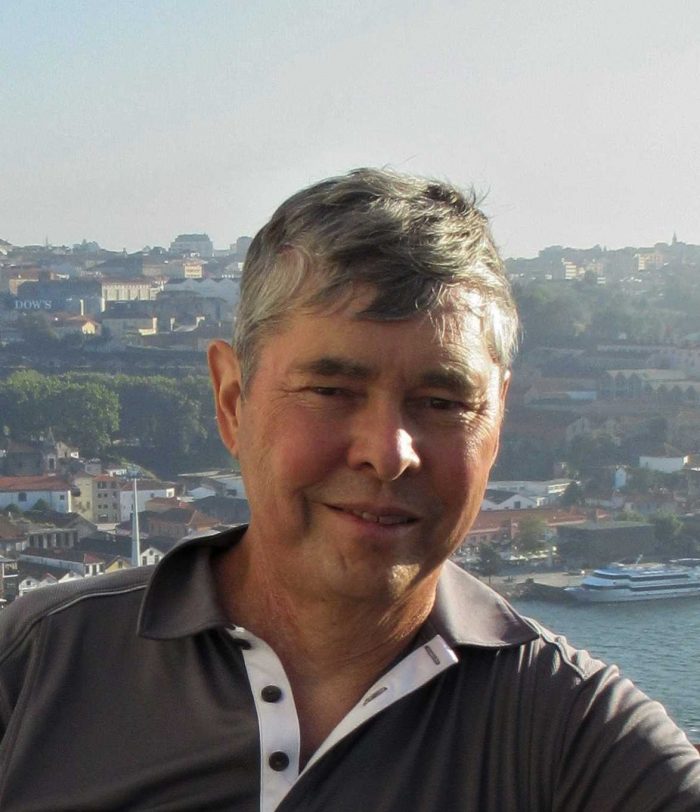 Randal has always been artistic; at first his focus was music and then 10 years ago he made a commitment to himself to start painting. Starting with acrylic and oil, he took classes at the Ottawa School of Art and completed a Certificate in Art Fundamentals.

Born with a bicuspid aortic valve, Randal’s condition caused him no issues and he led a very active life until his 30s, when he started getting heart sounds and other problems. Working for the military at the time, they decided to keep an eye on his heart health.  In 1999, he was in trouble – a ventricle was dilated. Doctors at the Heart Institute decided to do a valve replacement. Randal bounced back with tremendous results – the ventricle and heartbeat went back to normal. His two boys were 6 and 8 years old at the time, so it was important for him to regain his health and be around for his children. A few years ago, the valve replacement started to show problems and so it was replaced with a redo aortic valve and Dacron aorta. Randal remembers Dr. Bedard and Dr. Ruel performing his two surgeries, and he says the care at the Heart Institute is extraordinary – an “amazing experience”. Randal is also an Alumni Association member, and he feels it’s good that the Alumni keeps communication up and provides a community for former patients. He commends Dr. Keon for his remarkable achievement in starting the Alumni Association.

Randal learned about the Ceiling Tiles project when he saw the call out for artists announced in the Alumni newsletter. Since 2015, Randal has had throat cancer and has spent lots of time looking up at a hospital ceiling, so he was immediately able to empathize with the patients who would benefit from this project and thought it was a great initiative. He commented that there is always art in waiting rooms but not as often in treatment areas, and feels that the tiles can provide someone “who’s stuck on their back with something cheerful to look at and think about”. When deciding what to paint on his tile, his aim was to choose something that would cheer people up – and so he decided on this playful fish theme.

The Alumni Association would like to thank these three artists for sharing their stories with us. We would also like to thank all of the artists for their beautiful tiles that have made the hospital a more inspiring and calming space for its patients.