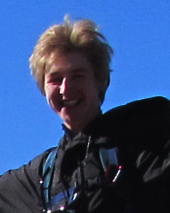 When I was only two years old, I had open-heart surgery at Sick Kids Hospital in Toronto. At 16, I received his first pacemaker. I suffer from Atrial Flutter, Arrhythmia and other related heart issues, which is why I needed these procedures.

I’ve since moved to Ottawa from the Bracebridge area, and am now under the expert care of the pacemaker clinic at the Ottawa heart Institute. I also commute to the Peter Munk Cardiac Centre in Toronto every year.

I haven’t let the pacemaker I had put in at 16 change my life drastically, though, and love to snowboard, ski, play hockey and get a squash game in when I can. If anything, it’s the medication that I take (Coumadin, a blood thinner) that has sometimes impacted my activities. I’ve been advised not to do anything TOO extreme because of the risk of bleeding that won’t stop because of the blood thinners.

This simply meant that I’ve had to just take things down a notch or two. For example, I now ski down groomed trails instead of skiing in the backcountry.

I also love to traveler. In 2012, I went to New Zealand to swim with wild dolphins and hike up mountains and volcanoes. And I did it all with a pacemaker in my chest.

I graduated from the University of Ottawa with a BSocSci in Economics and currently work as an Apple products technician at Bayshore Shopping Centre. My job allows me to continue participating in the sport activities I love while affording me the flexibility to travel.

My condition has not negatively impacted the activities I enjoy, the work I do, or the relationships I have. If somebody asks me about my condition, which rarely happens, I just tell them about it in simple terms.

In spite of everything, I believe it’s important to live and enjoy life to its fullest extent.